Love it or hate it, snow is a major part of New England
winters. To make matters more exciting, no two storms seem to be alike. This is
partially because of the consistency of snow, which is determined by a series of atmospheric factors
such as temperature, wind, dew point, humidity, etc. This creates a wide range
of probabilities that can be tricky to predict. The formation of a snowflake is
caused by a chemical reaction known as crystallization. Did you know that snowflakes are actually classified as minerals? How cool
is that?

A snowflake begins its life as a particle, or a speck of
dust. Traveling through the air, water vapor condenses (changing from a gas to
a solid) on this particle. From here, two formations may occur. Colder and
drier conditions will cause a faceted prism to form. Warmer and wetter
conditions will cause branching patterns. All snowflakes are hexagonal in
shape, with six sides aptly referred to as “six-fold symmetry.” This is because
the crystallization process works on the molecular level, and frozen water
molecules produce six sides. However, few snowflakes are perfectly symmetrical –
the arms and sides grow independently of one another, so subtle differences in
the branching patterns are typical.
Temperature and humidity play a role in which processes occur.
Changes imperceptible to humans determine the growth pattern. Sometimes both
processes occur at once. As the snowflake is blown around the cloud, it
experiences many changes in temperature and humidity. The likelihood of a
single particle undergoing exactly the same set of conditions as another
particle is unlikely. This is why no two snowflakes are truly identical. 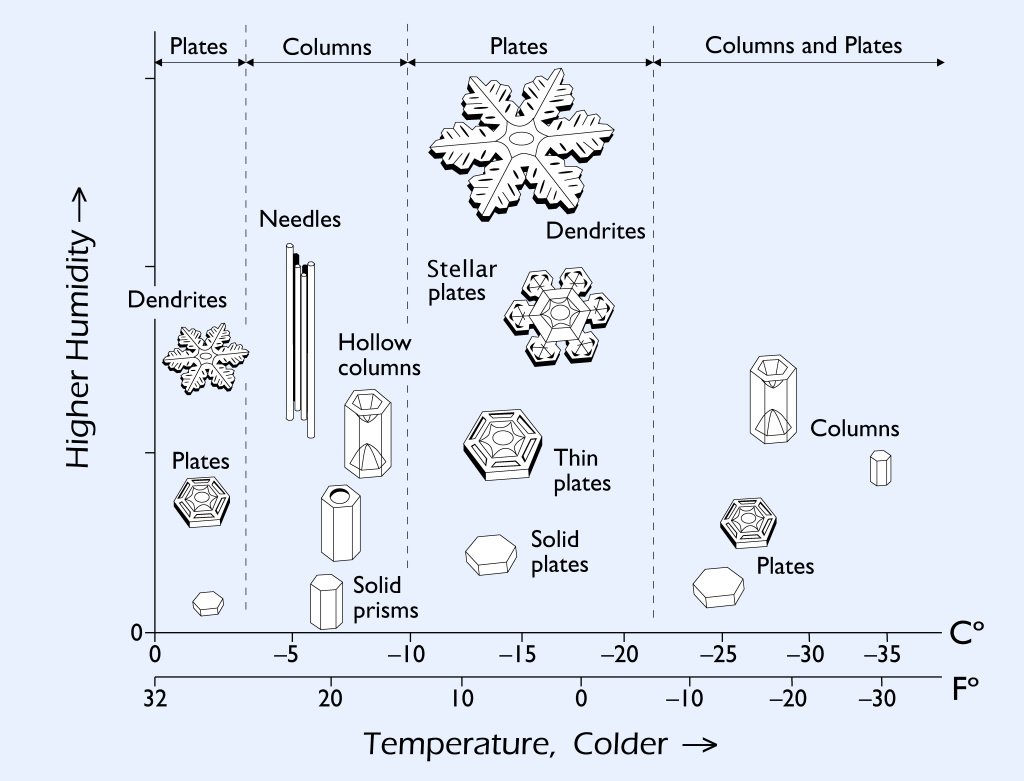 As a snowflake forms and gains mass, it eventually becomes too
heavy to stay in the cloud and may even combine with other snow crystals to
fall as clumps. As it journeys through the atmosphere, it will undergo
additional changes. If temperatures increase as it approaches earth, it may
change to water and fall as rain. If temperatures remain around freezing or
below, it will reach the earth as a snowflake. Ground temperatures will then
determine if it melts or begins to pile up with other snowflakes, forming and
contributing to what is referred to as the snow pack.